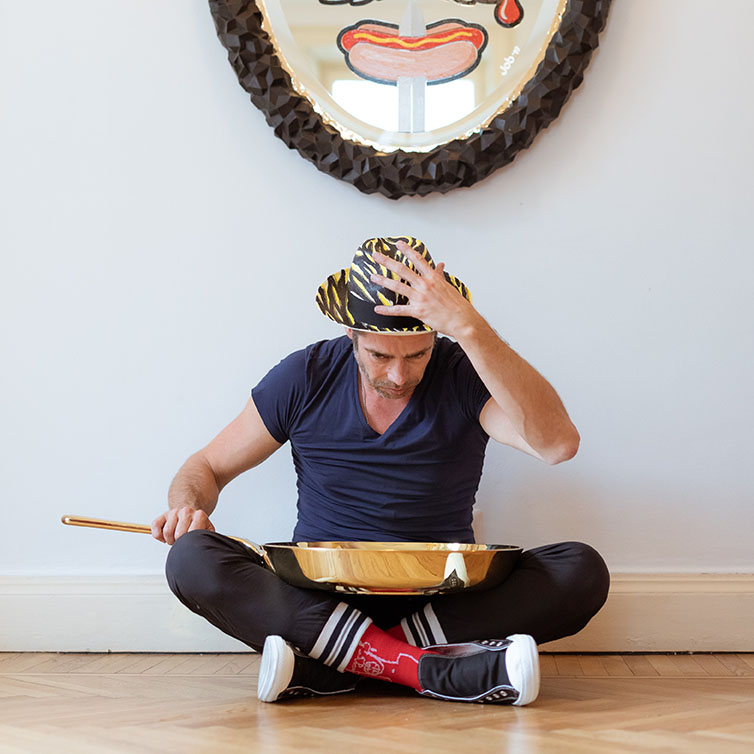 Rock-star designer, successful artist, industrial designer, furniture designer, creator of high-end kitsch, icon and one of today's most influential artists. If you Google your name, you’ll find some amazing descriptions. Which description do you apply to yourself?

“Hmm, you know which description I’d use for myself? I’m someone who does what they want to do. Twenty years ago, I was a designer with ambitions and now I am head of three of my own design labels - Studio Job, BLOW and Jobshop, and I am involved in graphic design, art-direction, architecture, art, fashion, music, furniture design, and plenty of other things.  And I think I can call myself an influencer too.”

Describe your life as a teenager.

“I was an only child and we moved house around twelve times. It made me focus on myself and define my own world. In that time, I developed characteristics that I wouldn’t have had if I’d had brothers, sisters and lots of friends. As well as being a business man, my father was also an artist so I was exposed to art in his studio. But when I started at the Design Academy Eindhoven (DAE), I wasn't really focused on art and design.”

Tell us about an important moment in your training.

“After four or five years as a student, people started to talk about my work and those around me began to realise that something important was happening. Lidewij Edelkoort, who was then a tutor at DAE realised that I would benefit from expanding my horizons and took me to Paris for a while. In the end, I set all of my experiences aside and created my own world, just like when I was a child. I realised that I could never work for a boss when I had to carry out mandatory military service and so I had no other option but to start up for myself. Other than that, I was permitted to join the academy on the basis of a children's drawing that I did in my father’s studio. Strange but true.”

And then you have to stand on your own two feet.

“It was a period of discovering and learning. I was only semi-trained as a designer because you didn't learn much during the training and I had no idea how to set up my own business. In that period, you just have to focus on yourself, your talent and your determination. And, of course, you need a little luck. At the time, the Netherlands wasn't ready for the images I was making. People thought they were expensive and also too ugly. So I knew I had to go abroad. To Italy. To America. And knowing what I know now, it was a good decision, ha ha.”

A quote that is regularly attributed to you in interviews is: “We make something that nobody has asked for.”

“At Studio Job, we make things that we find interesting to showcase them, and we don’t think about what others want to see. It’s upside-down marketing but it seems to work. If it didn't, Studio Job would not have survived for so long in its current form.  If a creation evokes an emotion in me, that's good enough. The only filter is me. Narcissistic? Arrogant? With the rare talent that I have, it would seem that I am quite effective at sensing when something is good.”

As a man of almost fifty, you travel the world, you’re a celebrated individual and regarded as an icon and an influential artist. Do you still have dreams?

“I’ve been able to cross out a few items on my unwritten bucket list. But it's funny, when you eventually realise something, you don’t experience the euphoria you’d expected. It just feels like something that you’ve worked really hard for. That is the sadness of seeking fulfilment in your work.”

Do you have a dream job?

“The thirty people who work at Studio Job have my dream job. They spend all day in a studio, making fantastic creations. Amazing! I have to keep everything up and running. And that’s not quite as much fun.”

Do you enjoy the things you've achieved?

“I sometimes find that difficult.”

Do you feel a sense of pride?

“I’m proud that I am creatively independent. That I’m international. That I speak languages. That I can empathise with other cultures and people. That I’m open-minded. I have diversity in my work. And, of course, I’m also proud of the fact that I lead an interesting life.”